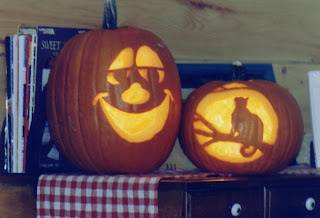 Ah, Halloween. I've struggled with this holiday my entire adult life. Mostly for financial reasons. And snobby reasons. Like, I'd rather use the money spent on costumes and candy towards Christmas, and it's hard for me to be thrifty on Halloween because I can't bring myself to buy a pre-packaged costume. Something (genetic--thanks, Mom) drives me towards cute, coordinated, handmade costumes, rather than store-bought costumes. And that means lots of time, money, thought, and energy. All of which I'm perpetually short on. 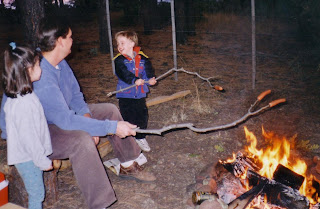 Sometimes I just think the whole holiday is stupid, and I've tried to find a way around knocking on people's doors begging for candy. For a few years, the kids did not go Trick-or-Treating. Instead we took them into the woods, had a campfire, ate candy, roasted marshmallows, sang songs, and decorated Giving Trees for the animals with apples tied to strings and peanut butter and birdseed covered pinecones. 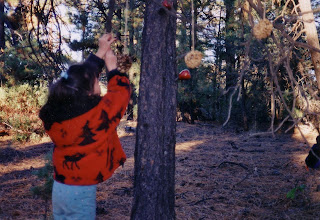 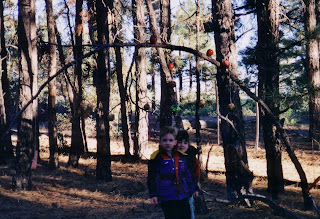 One year, my husband and I just had our own Harvest Party with the kids, and then later, when I was involved in the homeschooling support group, we organized huge Harvest Festivals for the kids, complete with pony rides, square dancing lessons, and bobbing for apple contests. And a real-life fiddler. Gotta have a fiddler. (And look how my kids are cheating in both of these contests!) 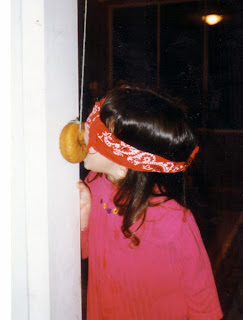 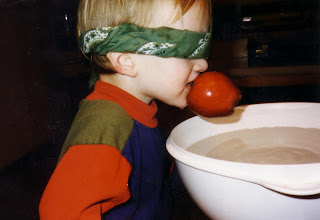 I've sewn umpteen costumes. Panda bears, dragons, children's fairytale characters, medieval ladies and knights. Unfortunately, I've had to sell them all off either to scrape together money for other things, or to decrease the surplus population of boxes when it comes to moving time.
One positive thing about being divorced and sharing custody, is that we also share the holidays, so every other year I don't have to do the costume thing. Well, except we now have Conor. Last year, my sister-in-law, Sarah, saved Halloween and mailed out the monkey costume my mom had made for one of her kids. It was perfect.
This year I was really sweating it. As of last Friday, I had nothing together for the kids, and the ward Trunk-or-Treat was Saturday. But I've been so preoccupied with other more pressing things that I just kept pushing that nagging "need costumes!" voice to the back of my mind. I think I mentioned that on my sister's blog, and lo, and behold, a Halloween Miracle.

My glorious mother contacted me and graciously supplied me the funds to create Halloween this year. Thank heavens! I found a relatively easy idea in Family Fun magazine, and on Friday I scoured the town for the fixings. Saturday was spent putting it all together, and the kids were a hit at the Trunk-or-Treat. And they cleaned house on the candy, so I talked them into donating all the stupid candy (you know, the worthless, non-chocolate stuff) to give out on Halloween (re-gifting at its finest). I think the two older kids will stay in that night and watch a scary movie or something and the younger kids will hit the streets for a bit. I must say, I am grateful that it all worked itself out this year. Thanks to my Halloween-loving mother.

Here are the gnomes and the mushroom: 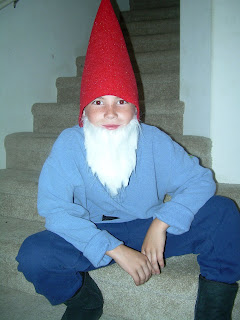 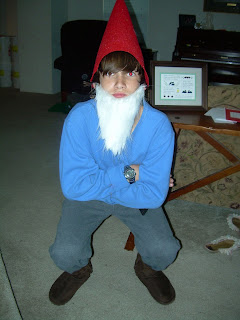 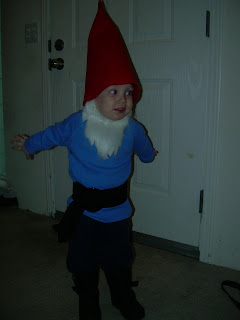 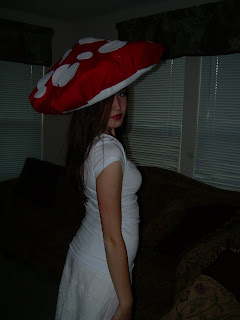 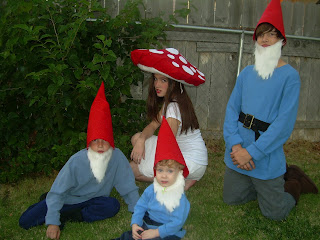 Absolutely LOVE the Gnomes and Mushroom!!!

and I think your 'giving tree' idea would be wonderful to do anytime of the year!

Hahaha! Those costumes are awesome!! Hahahaha! Tell the kids I love them!

That's so friggin great! Mom told me what the kids dressed up as and I couldn't WAIT to see pictures! Ahhhh!!! I LOVE IT!!!! Look at Conor! AHHH!!! What gorgeous gorgeous kids! Go give them a big fat smooch for me!

I'm right there with you on the Halloween thing. I hate spending money (that we don't always have) on costumes and I have no patience for making them. The only consolation is that the ready-made ones we've purchased in the past have been used multiple times and then end up in the dress-up box.

I always try and play down the costume thing and see what I can get (manipulate) my boys into figuring out on their own with what they've already got!

While I have nothing against it, really, I'd still be very happy if Halloween went away.

YOU are a genius! I love it... I wish I pulled off the homemade costumes, but I don't. maybe if i had an entire year to figure it out???

Yup-- right there with you. Your costumes are fabulous.

My goodness! Those costumes are fantastic!

You did great on the costumes! I'm glad it all worked out.

I LOVE IT! Too cute! They are the perfect set! I need them for our backyard!

I so wish I was creative in that department. I regret the fact that I didn't pick up sewing from my mother. I end up doing store-bought every year. I hate how cheap they look, but what else am I to do? I'm considering though for next year, just piecing costumes together at a thrift store. Make them more original. We'll see if the kids go for that idea!

Those are fantastic! Yay for you, and yay for Yoganana!

(Have you bought a shotgun yet? Because Lyns is WAY too pretty.)

I love the Gnomes costumes.. so clever..

Wo! That mushroom is the infamous Amanita Muscaria, which nearly killed me once. Siberian reindeer may get a kick out of it, but it is extremely dangerous. However, it is also quite stunning to look upon and exciting to find in the forest, aound the 8000 foot level, associated with conifers. The costumes are wonderful. You do everything well and mindfully. I love you. Shaloms to the gnomes.

Great costumes! you constantly amaze me with your creativity!

Did you really just say I get mother of the year? Who are we kidding????? I have NEVER sewn a costume. I can't sew a button on a shirt . . . seriously. You, my friend, simply rock. ALl I can say is wow!