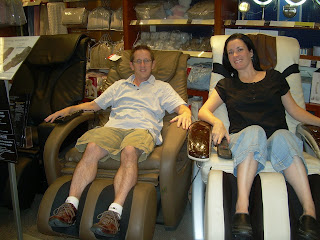 Every now and then I reminisce. Maybe not in a good way, but I can't help it. I'm not having a good time with my ex-husband right now. He has become a person totally unfamiliar to me. I have a very hard time dealing with the negativity that I feel toward him, this man that I spent thirteen years of my life and had three children with. And a whole lot of dreams. Boy, did we dream. So, sometimes, to prevent the anger and hurt I feel at his current choices from taking over my psyche, and infiltrating every other area of my life, I try to remember the good times. I try to recall his good qualities, or laugh at an inside joke we shared, or remember some of the fun things we did together. I'm trying hard not to hate.

The other day I realized with great sadness, that though the new Adam and I have been married for more than three years, we have very few memories. Life has been very oppressive and trying, and mostly we're just trying to survive from day to day. Between our exes, financial distress, and the logistics of a new baby and blending two families, we've had very little "down time". This puts an added burden onto an already statistically-doomed marriage. (You know how they say second marriages fail even more often than first ones.)

Ironically, most of our happy times and good memories have taken place in bed. Now, now, I'm not just talking about that (but thank goodness for that).

Since Conor is the child that we have in common, we love to cuddle with him in our bed. He's our doo-doo, and we adore him. He absolutely loves being in The Mom and Dad Bed. He loves to watch movies, to eat snacks, to just sit with us. Sometimes after he's been put to bed in his crib, we miss him so much we have to go get him and bring him in for some cuddle time. It feels good to have him with us. He was, after all, born in our room, and he did sleep in our bed for his first six months of life. And besides the Conor time, Adam and I also like to have our little parties in bed, where we rent a bunch of movies and order some pizza or Chinese, and make a night of it. Sometimes we have Sudoku races, or some video game Family Feud or Jeopardy on the laptop.

But the point is, it might also be nice to have some memories out of the bed, and out of the house. Something we could take pictures of and look back at them and say, "Oh, yes, I remember that day! Boy, I love you." Some actual evidence of fun, because in the heat of the moment, when life is weighing down on us, sometimes I need some proof that I like this guy.

So, I'm on a quest to create some memories. Adam and I are so different that the challenge of finding things we have in common should prove quite interesting, and might actually make for a great book someday, but for now, the goal is to get out of the house at least every other week and do something together.

This last week, the only time we could squeeze in was a few hours on Saturday morning. No matter, I was so determined to get out of the house with him, it didn't deter us. Our first idea was to go bowling together (we've never done that!), but the league had taken over the lanes till noon, so that was a no-go. To the mall it was. We shared some Panda Express in the Food Court. (We both love Orange Chicken.) We walked around and Adam wanted to pretend that we had money and were clothes shopping for me. That was fun for a bit, but then became depressing, so we moved to pretending we were buying gadgets for him. We found our way into Brookstone. That store is fun. Everything you didn't know you needed. Since the place was empty, we each settled into side-by-side Shiatsu massage chairs and relaxed our stress-tightened muscles. We asked the sales clerk to take some pictures of us. Man, those chairs are amazing. If I had one of those, I might never walk again. I would just spend the rest of my life catheterized and sitting there getting acupressured, rolled, and kneaded. It was wonderful! On the way out, we each got a Cinnabon. Every marriage should at least have Cinnabon in common, and luckily we do. Divine! 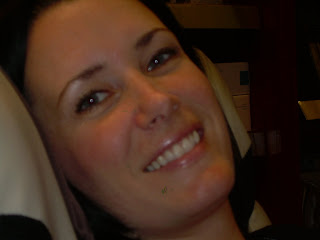 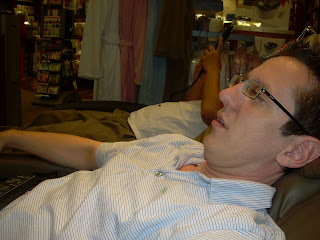 Awww ya'll are just too cute! Sounds like a fun day to remember.

If you haven't tried it yet..next time you're at Panda Express..pick up some Beijing beef and thank me later. I. Love! That. Stuff.

I know the feeling. We are so burdened that we rarely have time for each other. We promised to do something once a week to keep our love going. This weekend we get 2 things: Halloween Party tonight at Jonahs god-daughters parents house, and the Obama rally and speech tommorrow in Denver.

ohhh girl. This entry hit home. I could literally hit rewind and play it back on my blog and insert our names. (our..meaning me/DH)
Thank you for your honesty. The bed thing: We were pregnant premarriage. Big hint. And yes..we fall right into those statistics which anger me and most of the time depress me.
Ugghhh, I loved reading this and hated it. (affectionately) as I loathe the fact that we struggle in this area as well..'just being' and having good times outside of the 'other'.
Big hugs-----big big hugs,
A

I think it's brilliant that you're making memories with such a sense of purpose - you'll treasure them all the more.

Date night, morning, afternoon or whatever is crucial in a marriage. Glad you are starting that tradition for you and Adam. I was in San Antonio with my mom this past weekend and yes we went to TOFW (yes I went again..long story..) Hilary mentioned the way she keeps balance in her life is to 1- do the important things that Heavenly Father expects from us 2- study the scriptures (we all need to refill our well even if just for a few minutes) she said her day just goes better when she reads.. if she hasn't she sees a difference with how she reacts to her kids, life etc.. 3- Follow Elder Oaks advice from April conference talk -about Good, Better, Best - always choose the Best use of your time. 4- Date night every week. Time to recharge with another adult who is your best friend! Hope this helps!