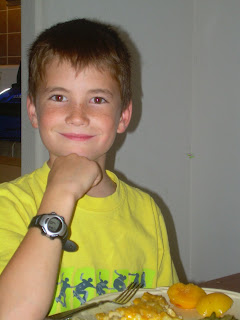 Last year Aiden went on a field trip with his cub scout pack to JPL. He got to lie down and have a moon rover roll over him. It was a big thrill. He came home that day with a fixed resolution to be a rocket scientist one day and work for JPL. He still maintains that is his goal. Or a doctor. That's his second choice because then he could save lives.

Last fall, I received a letter from his Magnet School. They wanted to have Aiden evaluated for the Gifted program and wanted my permission to have him meet with a psychologist for testing. I love evaluations, on me or my kids. I think it's kind of fun to be a psychological guinea pig, so I readily agreed.

Last week he brought me home a sealed envelope with the results.

Apparently, he is Gifted. With a capital 'G'.

I mean, I knew he was a smart kid. But, I think that sometimes he gets a little lost in the crowd. He's so quiet and unassuming. When your oldest child shines so brightly, it's easy to get overly-focused on her. And then along comes the firstborn son, closely following on his sister's heels, and they sort of become a pair. And little Aiden tags along. He's usually a happy kid, he's always done well in school. Occasionally he has temper problems, but he's growing out of those. He's a sensitive kid, a cooperative kid, a "Yes, Mom," kind of kid. He loves a challenge and usually rises to meet it. He's an organized, careful kid. And all along he's cultivating genius over there. This is mother's guilt talking.

I got several pages of handwritten evaluation notes from the psychologist. Aiden has 'extensive vocabulary' and is a 'strong leader'. He tests in the 'superior (underlined) range of ability' in nonverbal cognitive reasoning and processing. In every characteristic commonly found in gifted children, he scored a 5, on a scale from 1 to 5. He excelled in English/Reading and Mathematics, scoring in the 97th percentile nationally. He is "Intellectually Gifted". They would like permission for him to participate in the Gifted Program.

The one who chose chess and cello all by himself, and picked them both up effortlessly. My boy who was once given a blessing by his Grandpa Holiday that told him that one day he would be one of the best readers in the world. 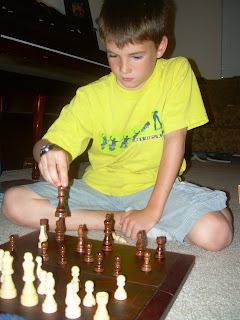 Little Aiden. He beamed when I told him the results of the evaluation. The look on his face was priceless.

This is the best kind of revenge for the youngest brother who is always picked on and left out by the older, cooler, smarter? brothers.

Awesome. Awesome. Awesome. This will change his life. You sound like one proud mama, with good reason. I know that your life hasn't always been a cake walk, and it seems like God knew you needed some stellar kids. I'm so happy for you both!! (Don't feel guilty. If you had pushed him to be incredible, he might not have been. So no guilt. Just move on with that Gifted Kid.)

You go, Aiden! Good grief; he'll be at JPL before you know it. So cool!

Such a good boy! I always got nervous taking those tests and had one of the district people come out and tell my mom I'd never really amount to anything. Oh how I've wanted to rub that in her face several times in my life!

Way to go, Aiden! That is awesome news, Jenna!

I love evaluation things too--everything from school stuff to blood work. How very exciting and encouraging to you both! I live near an engineering place and we have several 'Rocket Scientists' in our ward--great men.

Yay! That is great!

What was that quote? You know the one, the 'all that I am, or hope to be, I owe to my Mother' one.

One day, maybe 15 years from now, or 25, when all your kids are grown.. you are going to have four exceptional adults to take care of you. Oh what joy! You're raising your own retirement plan. :)

I should have played chess with him.

Oh wow, that is just fabulous!

I always knew he was "Gifted."
Love, Grandma Holiday