Under a Rock, Next to a Nerd

We didn't watch the Academy Awards. (Were we the only ones?)

Oh, wait, there was one film I saw. The one that probably nobody else saw. It was nominated in the Best Documentary category. Encounters at the End of the World is a documentary by Werner Herzog, about just what's going on down there at the South Pole. I figured we needed to shake things up a bit for Family Movie Night, you know, from the usual action violence and mystery and comedy. We got a little quiet and chilly (with our coordinating treat of ice cream), and some of us even a little bored. That's how real the movie was, because I'm sure we would be quiet, and chilly, and bored if we were to travel to Antarctica. At least some of the time. But the cinematography was beautiful. I was stunned to see such diversity and brilliant beauty in the lifeforms living in that dark, cold water at the bottom of the earth. It seems so much more fun to be swooning around in the warmer Pacific waters. These creatures really drew the short end of the stick, but at least they weren't shortchanged in their loveliness.

At one point, some under-the-ice diving occurred and water samples were collected. Tiny little organisms danced about under the microscope's eye. And then Dylan says,

"Wait, is it a prokaryote or eukaryote that doesn't have a nucleus?"

And Lyndsay answered (she answered!) "Prokaryotes don't have a membrane-bound nucleus or organelles, but their genetic material is still distributed throughout the cell's cytoplasm."

And Dylan replies, "Oh, yeah. That's what I thought."

And I chime in, "You two are a couple of nerds."

But I secretly love it. I love that my teenagers actually listen in science class. It's cool. (and they're good looking to boot!) 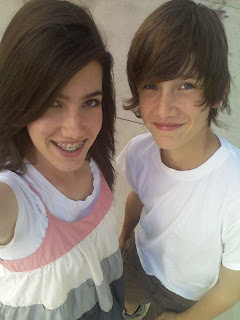 Nobody has time around here to watch much television anyway. Our studies consume most of our free time. My first semester ended last week (and I got an A!), and my next semester begins this week. I'm taking 9 credits, three classes. One online (Business) and two night classes (Biology and Humanities). You should see the reading list for my Humanities class. It's a whole post in itself, and probably forthcoming. Mama Mia!

Well, at least I now know that it's prokaryotes that don't have a membrane-bound nucleus. That's got to count for something, right?

(Oh, and our Antarctic documentary? It didn't win. Some guy tightroped it between the twin towers and he took home Oscar. )
Posted by Jenna at 7:34 AM

I totally live under a rock most days too! What smart kids you have. Ten bucks says they can help with your Biology homework!

I saw it last night. I don't normally these days..but for some reason I saw it. I was right on up there with everyone else in the room with teary eyes when Heath Ledger's fam went up to accept an award on his behalf. There were some speeches that also lured a few pregnant tears out of me. All in all..I think it was good times.

And I'm still laughing about Lyndsay and Dylan's conversation. I read it outloud to Orion and stumbled on some of the words..having to sound them out. Clearly, Science was *not* my subject. Orion got a good laugh out of it too. Those are some amazing babies you have there, Jenna. Amazing. Give them hugs for me.

That is so hilarious. Much smarter than me...

I love awards season. I see them all. I'm a nerd like that... Much more impressive to know the stuff your kids know then who wore what designer, or that sean penn didn't thank his wife...

No, we didn't watch them either. I could really care less about all of that. We do have a television but no cable and I prefer it that way. We like to read around here.

I didn't even know the academy awards were last night--so I'm with you there. I don't like sea creatures, so I'm not surprised that I've never seen the documentary, and I have no doubt that my kids are waaaaay smarter than me. But that makes me feel like I've done something right if they can grow beyond the genetics I passed onto them. Maybe they can help you with your homework this quarter :-)

I watched the awards last night. They were pretty good, but I don't think "The curious case of Benjamin Button" should have won so many awards. I think "Dark Knight" should have won more. But that's just my opinion. I just watch it to see what they're wearing! Your kids are so darn smart. I don't even know what those words mean!

I love the rock I live under. I think it helps keep me happier.

And I hope my kids turn out half so well as yours!

A what and a what that have a what? And your teenagers know this?

You know about my deep and abiding love for everything Antarctic, right?

I love those kids!

Congrats on the A! Not that I'm surprised.