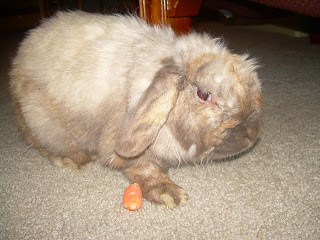 Meet Chadwick, our (Lyndsay's) Holland Lop. He's not supposed to be still alive, but as you can see, he still is. Though, admittedly ragged, poor baby. 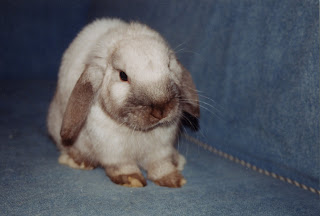 This is what he looked like when we bought him. That was ten years ago, three states ago, and three couches ago. He was a reward for Lyndsay, who was six at the time, because she had finally stopped sucking her thumb. 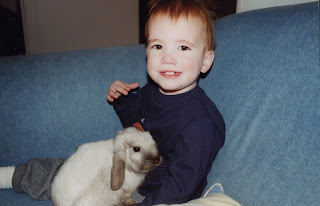 This is Aiden holding baby Chad. Aiden is now getting ready for junior high. 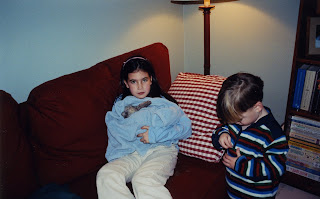 This is Lyndsay holding Chad, after having him for about two years. (See how Aiden is older? See how we're on couch #2?)
Chadwick was supposed to live a maximum of eight years, according to the pet store, and bunny books checked out of the library. So far, he's lived ten, and though he ain't what he used to be, he doesn't seem to be going anywhere anytime soon. We've bought him three different cages, upgrading each time. But cages are expensive, and several years ago, when his cage got cracked, we taped it up. Then when the door broke off, we replaced it with cardboard and more tape. I mean, I wasn't spending that kind of money when he was already past his expiration date, you know? Poor thing lives like a hobo now, though he is definitely fed better than any of the hobos around where I live. 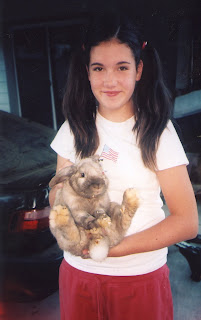 When Lyndsay was 11, and Chadwick had already survived snowy winters outside, scorching summers outside, moving from Arizona to Utah, and Utah to California, both times sharing his cage with a cat, I noticed something different about him, and I contacted a rabbit breeder friend who told me the bunny probably had contracted a deadly and horrifically painful disease called Myxomatosis. The children and I wept. We knew how the disease would progress and that the recommendation was to euthanize the animal to avoid the suffering. Problem was, we were broke. I didn't have the money to even pay for the vet, so we just prayed and prayed, and I worried about what we should do. Lyndsay had Chad sleep in her room, for what would surely be his last nights. It was heartrending, the scene of drama around the house.
But then, Chadwick got better. I mean, he's still here five years later. We don't wish him gone, certainly, but Lyndsay now realizes what a commitment a pet is, and how when she was six, she certainly didn't still want the responsibility through high school. I know every time Lyndsay cleans out the cage she hopes it's the last time, and every time she doles out the money for his food and litter, she wonders how much longer she'll have the expense. It's kind of joke around here now, how he just keeps on living. Dylan says we should return him to the pet store with the complaint that we wanted a "mortal bunny".
Chad got out last night. I came down to make breakfast, and there he was, grazing in the back yard, happy as can be. The tape and cardboard had come loose. Aiden, always a softie for a little creature, brought him inside to hang out. He hopped under the chair in the living room and flopped down to nap. Maestro, the cat, joined him. Neither one seems to realize that they should be enemies.
In fact, several months ago, when the cat got out (who is not supposed to go out. I mean, since he's best buds with a rabbit, he can hardly be trusted to have street smarts. Plus, he is a very expensive brand name kitty.) He was on our property, but some hoodlum gangsta cats found him on the side of our yard and started all up in their jealousy over his pretty, pampered appearance. The bunny, from his spot in the back carport, could hear the ruckus, and seemed to know something was amiss. He started thumping his back legs, which is what Aiden heard from inside the house. Upstairs through an open window I could hear hissing, and I flew down the stairs to rescue the cat, but as I came around the corner, Aiden was just coming into the house with a very humbled kitty in his arms. "I heard the bunny," he said. They take care of each other in their own way.
So, Chadwick hangs on. Who knows how much longer we'll have him. We can't complain really, since he is quite unobtrusive, as far as pets go, and he has endured his share of cage neglect without even a sound. Besides being fed and watered, he gets ignored for long stretches of time, but then he lives for the summer when he is let out to play in the grass and the garden. Fresh carrots and everything.
I love Chadwick, I do. But seriously, if he outlives Lyndsay here at home, something's up. I may just send him with her to college. No?
Posted by Jenna at 10:03 AM

Awww cute little bunny!! This is so funny to me because Bella is 6 and all she's been talking about is how much she wants a bunny. Maybe Lyndsay can just pass good ol' Chadwick down to her. Hahaha!

Don't forget, Chadwick evacuated with the family to Albuquerque in 2002. Great little bunny that he is.

What an awesome bunny. My sister's bunny, Ashes, did not fare nearly so well. Dogs. Need I say more?

I love that he and the kitty are best buds. Too cute. And my otherd sister is feeling like their dog is past his expiration date too. Sigh. And yet you'll all be sad when the much anticipated day finally arrives!

I'll be like Chadwick. "Dad, we thought you were going to croak 40 years ago! You promised! Come on already; it's time to meet your Maker." I know. I know. I'm gettin' there. Hang on a little longer, kids. It won't be long now. Of course, it would be nice if Raelene would clean out my cage once in a while.

That is just how we feel about Buddy. He just won't die poor guy.