A Husband's Demand to Blog... 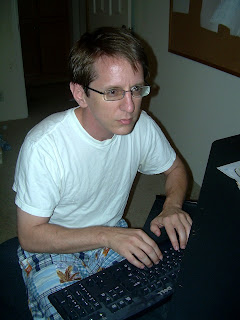 When Jenna asked me what should she blog about today, I said "let me write it for you. " This is her husband, Adam.

Tonight, Jenna was complaining that she is tired of being fat and poor. Gee, what do you say to that even when it's not true? Well, about the fat part anyway. You girls really have us against the ropes with that one. I can't really give her condolences or show grief for her feeling that way, because that's just as bad as if I agreed or called her it myself. But then again I can't try and convince her she's not either, because then she'll think I'm placating her, which means I'm trying to avoid saying that I really think she is, which again, gets me in trouble. So, I realized this: Don't say anything. Just start groping and kissing until she forgets about it.

The truth is girls, Jenna is just right. She has without a doubt the sexiest legs I have ever seen; from her dainty ankles, to her razor sharp shins, to her always silky smooth shave that goes all the way up... A true babe. And why is it she thinks she has to be some hard-body cover girl on the front of some cheesy magazine? What Jenna doesn't believe is, is that guys don't really want some hard-body gym-freak to snuggle with. It feels too much like you're cuddling with a man. Leave the six pack and triceps to us. We like some squish on our woman. In fact secretly, we like that no matter where our hands are, it's like we're caressing a breast. A perverse confession maybe, but still it's true.

Since Jenna has begun teaching piano, she has been noticeably happier. Maybe it's because she's really good at it, or maybe it's because people actually have to pay her to boss them around, or maybe it's how all these older men from church have suddenly developed an interest in learning to play, so they try to set up "private lessons". I must admit, I'd pay 20 dollars to sit on a bench next to her for half an hour too. Luckily, Jenna has made it a company policy to not fall for that one.

Whatever you do, if you're the type of person that feels stupid if you lose at a board game, never play Jenna at Scrabble. She's a human dictionary. She cried in that spelling bee movie. Mensa even extended an invitation to her, but sadly... she was too broke to pay the fees. True story... I think.

Another thing about Jenna, is that she never ever smells. It's a weird freak of nature. No body odor, sour feet, bad breath, nothing... Ever. It's like a superpower.

People often ask me how I got such a beautiful and equally great a woman to marry me... My response? "You gotta lie to them on the Internet". Which I did. I added an inch to my height. Which had me sweating the whole way to our first meeting, because unlike the other girls, Jenna was actually the same exact height I had said I was on my website. And her last husband, also named Adam, has me by more than a foot. So when we met, of course she called me on it almost immediately. Luckily, I was able to convince her that our heads were just shaped different and her eyes are placed higher up on her face, so it just seems like she's looking down a bit.

I guess what I'm finding myself painting for all of you who read these blogs, is that the truth is, Jenna is better than me in almost every way. She's taller, smarter, less smelly, sexier... But, in my own defense, there is one thing I have that is better than her... I'm far more lucky than she is.

Now let me ask her to correct my spelling...
Posted by Jenna at 8:16 PM

"...it's like we're caressing a breast." Totally had me laughing out loud dude! So true. My dear husband has been known to say that he always wanted a woman who could withstand a strong wind. Little did he know that he would end up with a woman who can withstand a gale force storm. LOL! It's nice to hear from you and have your perspective. You definitely are a lucky man! ;)

I was laughing out loud too, but my favorite part is when you said, "Just start groping and kissing until she forgets about it." I died. Adam, I think the only one here you have to convince that Jenna is great is Jenna. Everything I've read from all of Jenna's faithful blog readers is nothing but admiration for her. Fun to hear your take on why she's great!

i totally agree about that. The only person you have to convince about the amazingness of Jenna is Jenna... (but tell me, how annoyed is she at my making up complimentary adjectives???)

I knew she was fabulous - nice to have it confirmed. We women like nothing better than a little validation.

What a funny and sweet post. So interesting to get a little insight into the workings of the male mind...LOL

Thank you for posting, your insight and honesty is awesome. My husband concurs too...from the "groping and kissing until she forgets" to wanting everything your touch to feel like a...well, you know. :)

This whole post just brought me joy, start to finish. Adam, glad you blogged on behalf of your dear wife today.

What a sweet guy, even if you did lie about your height. Jenna's lucky, too.

I was also L-ingOL at this post. A bit more..."honest" than most women are on their blogs! But still enjoyable. I feel like I know Jenna a lot better.

Funny and sweet! And so true :)

Funny! This was a great post! You two are perfect together! I love it. Thanks Adam for the laugh and thanks Jenna for letting him really post this. I have to admit, I'd have edited out all the embarrassing stuff but I love that he said it all.

awh this was completely adorable to hear it from your adam's perspective.

what a dear he is to you, kathleen :)