Stop at the Eleventh Hot Dog until Next Month 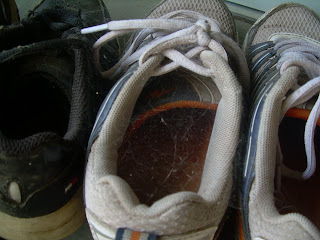 You know your kids have been gone a long time when you see cobwebs in their sneakers. Kids never sit still long enough for spiders to move in and set up shop. And though it's been a long six week absence, my oldest three will be home on Friday! Yay!

I read an issue of a parenting magazine this week. I hardly ever read magazines, especially parenting magazines, because I. . .well, I'll just admit it. I rarely ever read something in them that I don't already know. How arrogant is that? Every now and again I see a good mom's-eye-view piece detailing a personal experience that I like the spin on, but I already know how to deal with colic, potty-training, getting kids to help around the house, school bullies, and nightmares. I don't usually fall for all those gotta-have-'em gizmos that are always coming out to make a mom's life easier. To me, it's mostly all clutter, and clutter that's gonna be past its prime in 6-12 months anyway, so I'll choose to struggle through without the "perfect solution" to this-or-that. I think most of the recipes they give in those magazines are highly impractical and ridiculous (though admittedly cute). Like I have time to cut pimento eyes and bell pepper smiles? And why are we giving in to cutting sandwiches into flowers and sailboats just so a kid doesn't have to eat the crust? And what are you doing with that waste??? Why does dinner have to look like something other than dinner to get a kid to eat it? Woman, you better think twice before you start catering your dinner plate to be entertaining to your child. Who has time for that? You're setting yourself up for a bad fall later on down the line. What ever happened to eat it or starve? With the time you saved on not making the cucumber and American cheese into a sailboat stuffed with tuna, you can read your child a book--now there's an idea! And I will never buy a product that gives a kid permission to draw on any wall, anywhere, because that would just undo all the work I've been doing with "we only draw on paper!" We can't keep changing the rules on them! (Here let me paint your room with chalkboard paint so you can have permission to color on the walls! There just wasn't enough dust in here already. Or, here are these great markers for bath time. Because after I'm done scrubbing the tub, I really want to scrub the walls too. And I like my bathroom to look like an inner-city underpass. Let me find a way so you can do whatever you want and life can be all about YOU. Not.) I digress.

But I was struck with how terrifying these magazines can be for mothers. Did you know that if you eat hot dogs one or more times per week during pregnancy that your baby has double the risk of developing a brain tumor? And that if a child eats more than twelve hot dogs a month he has nine times the risk of developing leukemia? Or if the father eats more than twelve hot dogs a month the risk for the child is the same? So, stay away from the hot dog eating contests and the men who win them!

You also must worry about toy recalls for high levels of lead in the paint, the high levels of bisphenol (BPA) in clear plastic baby bottles which has raised "concerns" that they may cause neurologic and behavioral problems in children. Thunderstorms may cause asthma attacks. Car seats in the center back reduce injury risk by 43%, even though you can see your child better in the rear passenger side. There's arsenic in your water. Oh, and tap water is more regulated than bottled water after all, great. Grilling food causes carcinogens. Be careful of pesticides and herbicides if your child is playing in the garden. Sunburn pain-relieving gels may cause seizures if your child swallows even a small amount. Worried about the feces that are flying through the bathroom air and landing on your child's toothbrush? Well, you should be. (but they have this great new gizmo to protect the bristles of your child's toothbrush, and in these fun new animal shapes!) Soy formula isn't better for milk-allergic babies after all. And the list goes on and on.

How do any of us survive? How do we have time to do anything but survive? These magazines make it seem like a full time job to keep our kids away from harmful, cancer-causing, seizure-inducing, leukemia-forming, toxic, dangerous, potentially hazardous STUFF. When are we supposed to have fun?

Well, I take it all with a grain of salt. Shake my head at it all. The world gets better. The world gets scarier. The world gets easier. The world gets more dangerous. I have enough to worry about with the character of these kids I'm raising. I guess they're stuck with a mom who only lets them drink water (as in not soda or juice) when they're thirsty--filtered tap water, thank you; who makes them eat fruit and vegetables for snacks--that are either organic or have been rinsed for pesticide residue, and a mom who never cuts the crust or the peels off of anything (that's where the vitamins are!); who won't let them have cell phones or more than 30 minutes a day on the computer, and who has banned MySpace; and a mom who makes them go to bed when it's still light outside because she believes that most behavior and attention problems with kids are due to not enough sleep. Read to them, talk to them, pray with them and for them, love them, make them work and go to church, and bake them cookies. The bare bones of motherhood.

Amen, woman! The more I hear about what can kill babies, the more relieved I didn't know half of the latest discoveries while I still had babies.

I don't read parenting magazines either. You sound like just the kind of mom I am. My kids used to tell me I was mean because I wasn't as permissive and fun as the other moms. Now they just tell me they love me and they roll their eyes at all their spoiled friends and cousins. And spending extra time on food. I refuse to take the time to make something cute if they are only going to inhale it in 30 seconds anyway.

I am so completely with you! I was reading the hot dog thing going "how in the world would they EVER know this for fact?" We are a generation of kids who grew up on hotdogs, Mcdonald's, sugar cereals, soda and candy cigarettes. Are we the healthiest? NO, but one out of three of us isn't dropping from brain tumors or leukemia... It's horrible when those things happen but I highly doubt that it's all due to hot dogs.

I don't read them. Like you said, I know the important stuff. The rest of it is page filling fluff so they can continue to get their $5.95 an issue...

Amen! I thought it was just me... I've stopped caring about studies because one disproves the last one if you wait long enough. I can only live my life and teach my kids what they need to know. :)

Yo niece of mine. I knew from the day you were born that you had more common sense than most, but was I aware of your amazing humorous side until recently? I think not. I LOVE YOU!!!! You're a great mom. Aunt Lori

I'm glad your kids will be home soon---sneakers with cobwebs is just not right! Mainstream parenting mags are annoying and they rehash everything all the time...yawn. I used to enjoy Mothering magazine even though it's a bit crunchy-granola. At least it had information I hadn't read 100 times before. So how'd you get so danged eloquent anyway!?

I read this same magazine cover to cover the other day because I was trapped somewhere with nothing else to do. Then I came home and threw it away. Can't believe I got suckered into a subscription in the first place. What a waste.

*You* have much better parenting advice. I'll just subscribe to you and write with any questions I have. Sound good?

p.s. I'm excited for you to have all your kids back under one roof.

I'm excited for your kids to come home! You're a strong woman. Mine went away for a day and I was more than ready for him to be home safe with his momma! Hugs to you!

I avoid all parenting books and magazines for all the reasons you covered here. Brilliant post!

Wonderful post! I avoid parenting magazines like the plague. I don't have time to worry about all that stuff. Like you said, I have enough to worry about, trying to develop their character.

I also avoid pregnancy magazines. This is my fourth pregnancy and I'm just now hearing all this stuff about not being able to eat lunch meat and salami and tuna and blah blah blah. Pretty soon the only option will be lettuce and a handful of prenatal vitamins!

Oh if all of that is true, my boys are so screwed. Hot dogs are our main course 3 times a day. (Okay, not really, but we like our processed meat...) You always make me laugh, Jenna.

You are so speaking my language.
I also found that I am a much more content person when I stopped reading magazines.Go figure.

Jenna, that picture is wonderful -- you know, a thousand words and all that.

And today is Saturday --- so the long wait is over!

Lookit you on iVillage! I knew you were cool . . .

How to raise children...and then you schedule the appointment with their therapist because they are OCD from worrying so much. Life is to be lived... with gratitude. You get what you get and you don't throw a fit!

so wait, does that mean I can or can't enter the Cony Island hot dog eating contest for Jews? They have it every year, and I thought it'd be good to join, after all, I love me a good Hebrew National. And what if my dog eats a hot dog then licks me? Will I get a brain tumor?

It seems like everyday there is some new discovery that contradicts the last study. I so bought into that stuff with my first kid, hence his neurotic behavior. The second time around, I learned I don't have to boil everything, and Baby Einstein isn't the Gospel. Parenting is a trial and error kind of thing, so some people need some kind of "manual".