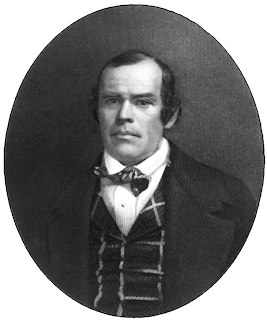 My dad gifted me his copy of Autobiography of Parley P. Pratt a few years back with the following inscription:
"Presented to the lovely Jenna Lynn by her doting father on this 19th day of April, 2003, knowing her to be a woman of great curiosity and spiritual attainment, whose thirst for truth surpasses even his, and whose desire for righteousness is unequaled. May God bless her forever and ever. Amen."

Well, I don't know if I can really live up to all of that, but whenever my dad gives me a book, especially one of his own, I pay attention. At the time that he gave me this book, I was going through extreme personal trials, and I can remember him telling me that Parley Pratt also experienced much opposition and personal trial in his life, and that he was a great example to follow in his humility and steadfastness.

I'm reading this treasure again, now. There are a couple of things that have stood out to me in this reading. For one, he doesn't give much written space to the horrible things that happened to him, just as I imagine he must not have given much of his emotional, mental, or spiritual energy to them. He accepted them as part of his life and apostleship, but didn't let his adversities (of which are many, and devastating) define his life or his character.

Parley lived in dire poverty most of his life, even since his childhood. His father, and later he, lost their entire farms due to the inability to come up with the entire mortgage amount due for the yearly payment. It didn't matter that they had cleared acres and acres of wilderness land, or that they had built a house on it, or that they had farmed it. The crop didn't sell well that year and so out they went. With nothing. Twice. I'm reading it, mentally screaming about the injustice of it all, and he's already moved onto bigger and better things. I'm not sure my journal would consistently read the same. But that was a quality of Parley. He casually mentions that he walks 1500 miles on foot through thigh-high snow and that he is sick nigh unto death and that his wife is suffering with consumption and loneliness and that they are destitute and that oh, they've been trying for ten years to have a child with no success, and he is falsely imprisoned and on and on and on. But if you blink, or skim over the page, you'll likely miss it. Because despite all of that and more, he's so grateful to be part of the rolling forth of the kingdom of God. He is party to miracle after miracle. Doors are opened, blessings poured down upon him, healings left and right, and he is able to meet the challenges set before him. And he can only rejoice.

Another example of a briefly mentioned trial takes place in 1834, when a small army of about 200 men set out to take supplies to the misplaced Saints in Missouri, crossing on foot a distance of about 1000 miles. They make their camp by Fishing River, in Ray County, between the forks of a stream, which are about 6"-8" deep. Suddenly a storm of enormous strength and ferocity rises up and assaults them with torrential rains, winds, earthquakes, and lightning. They find themselves struggling to get to an open meetinghouse nearby for shelter. The tents have all blown away, and many of the men are laying eight inches in water and nearly drowned.
The next morning, he casually mentions, those little forks of Fishing River are now twenty to forty feet deep and rushing. And they are made aware that an army of outlaws had discovered them and would have attacked them, had it not been for the sudden storm, which prevented the mob from crossing the stream to get to them.

The other thing that impressed itself upon me was how providential this trial was for them. God obviously sent the storm to protect this group of people. I wonder if the people, at the time, and without this hindsight perspective, were thinking, "Why me? When will the difficulties end? When do I get some rest?" Especially after all they'd been through and endured. And it got me thinking about my own trials, and I wonder how often they are a protection for me? Either literally, as in something even worse would happen had they not come, or maybe spiritually they have been a protection. Trials definitely tend to keep one on one's knees and with one's heart tuned to the whisperings of the Spirit. Staying close to the Lord is most certainly a protection against vulnerabilities that often accompany times of trial.

Trials protect us. I'd never really thought of it that way before.
Posted by Jenna at 8:01 AM

Wow, what a facinating perspective!

Thank you for sharing this - I needed it today.

That sounds like a fascinating book. It's amazing what the pioneers went through, and how, oh say, a WALK to Missouri was just something they did. They all are truly inspirational and then when you point out that trials protect us...yes, that's definitely something to reflect on and see the wisdom in.

Thanks, Jenna. I needed to hear this too.