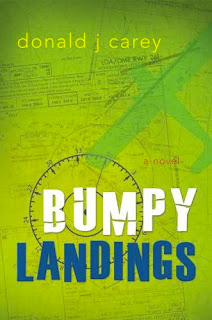 Bumpy Landings is Don Carey's debut novel. He started writing as a creative outlet, and soon realized how much he enjoyed it. The encouragement he met along the way, along with great writing support, helped him turn his "ramblings" into a dream accomplished. I was really excited to read this book. Don is a faithful reader here at Cranberry Corner, and I knew he'd been working on this novel. Still, it blew me away. This is a great story!
Jordan Macdonald is a young man, returned from his mission, and working through the "what next" phase of his life. Set in beautiful Hawaii, Jordan is a student at BYU--Hawaii, and works part time at a flower shop. His heart is in learning to fly, a promise he made to his father who also loved flying, and who recently passed away, but his mother has forbidden it.
I loved reading the story through a male character's point of view, a peek inside the mind of a young man. Don did a fantastic job at bringing to life each of the characters, Jordan, his circle of friends, and his romantic interests too. Oh yes, plenty of romance. And that newly budding kind, the kind that seems so far in the past, and yet, Don writes of it like he lived it yesterday. A guy trying to read a girl's mind. It's classic coming of age stuff. I just kept thinking, "Poor Jordan!" I also loved the story being set in beautiful Hawaii. Though I've never been there, I dream of going, and I have a sister who lives there. Some of the locations described were familiar from her, and in a small way I felt like I was there with her, seeing everything with my own eyes.
The plot moves, which was great fun. Carey has packed so much into this story, twists that surprised me, and added elements that kept the storyline fresh. I never felt, as I read, that the story was forced or formulaic. Up until the very last few pages I had no idea what Jordan's fate would be. I loved that.
I hated Jordan's mother. I think I was supposed to, though. Her overprotectiveness and control was out of bounds for a son who was a grown man. Jordan was fenced in, and trying to be true to himself. His goodness finds a way to temper his mother, even when he isn't completely following her orders.
There's not much of the story that I can share without giving away surprises. But there's humor, romance, suspense, tragedy, sympathy, drama, and action. It's all there! The novel was written for young adults. Once I was finished, Lyndsay grabbed it from me and has started working her way through it. She's going to love it.
So will you.
Donald J. Carey, you did a fantastic job! I am so excited for you! I don't see bumpy landings in your future, but rather, smooth sailing!
Posted by Jenna at 8:22 AM

Thank you so much for being a part of the blog tour. I'm really glad you enjoyed Bumpy Landings!

Sounds interesting. I usually avoid LDS lit but perhaps a story told from a male POV and written by a man would be different? Sounds like you really enjoyed it- I might have to add it to my reader.